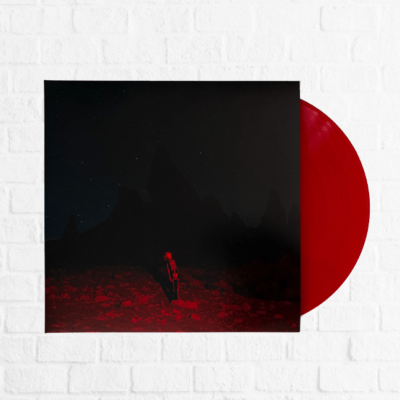 We’re thrilled to offer our members an exclusive pressing of this record. Bridgers’ lyricism and honest songwriting are second to none, and her ability to express complex emotions through her music is inspiring. We offered the debut LP of her project with Conor Oberst, Better Oblivion Community Center, through the vinyl subscription club in 2019, and it’s so exciting for us to be able to offer more of her amazing music.

Become a monthly vinyl club member and get the vinyl record of the month delivered to your doorstep!

Bridgers released her debut album in 2017 as a relatively unknown singer-songwriter living in Los Angeles. A little over two years later, she’s become an internationally lauded musician with three acclaimed bodies of work to her name: her solo debut, Stranger In The Alps, the boygenius EP with Julien Baker and Lucy Dacus in 2018, and Better Oblivion Community Center, a surprise collaboration with Conor Oberst, in 2019.

Bridgers is a singular talent, and also the rare artist with enough humor to deconstruct the tired heuristics of a meteoric rise. Punisher, written and recorded between the summer of 2018 and the fall of 2019, cements her as one of the most irresistibly clever and tenderly prolific songwriters of our era. Returning to work with her Stranger In The Alps collaborators Tony Berg and Ethan Gruska, Bridgers – who co-produced the boygenius EP and Better Oblivion Community Center album – stepped into the role of co-producer for Punisher and has drawn from the same tight-knit group of musicians who appeared on her debut as well as those she has worked with since.

What I will say about ‘Punisher’ is what I could say about any of Phoebe’s music: that it will be honest with you when you really wish it hadn’t.

Think of it like this, it’s the moment that a dog drops a dead bird off on the porch. The owner, repulsed and feeling an uncomfortable, pitiful flattery; the smiling mouthful of feathers and the simple animal wearing it proudly; and not least of all the whole gesture’s victim of collateral damage: the bird minding its own oblivious, avian business. It is gruesome, touching, and most importantly accurate. It calls for the kind of mourning we humans do sometimes when we realize what our lives can bring us is more savage than we could have imagined, and somehow less malicious. This record creates the space to unfold the dissonance of just this kind of moment. It is a painful and exhausting and healing and powerful thing to be able to hold all this together—the ugliness of an attempted kindness misled, disappointment dulled by clumsy grace and reluctant forgiveness, a swell of some warped cousin to joy that comes on like an ambush in the middle of the whole ordeal.

When I listen to Phoebe’s music I have the feeling of sifting through grains of memory to pull them out to hold them up to light, turn them over and really look. It is an excavation in truest sense, exhuming ghosts and primitive tools of the past to examine again and hopefully learn something. Here you don’t really get a dissertation, you get a box of slides and a projector to make sense of on your own time. Here are the images: the sterility of a bleached-bone-colored strip mall, the pedestrian boredom at a temple-turned-tourist-attraction encircled by a groaning city, a flatbed truck covered in roses, a house on fire.

These songs are entries into an anthology of solutionless, ongoing experiments, a document of gleaning in progress, a picture of a woman inhabiting the no man’s land that exists at the border of what we understand about ourselves and what we don’t yet. No manual, but a crude map with pictogram landmarks. All the heartache around which is no shortcut, all the relief which inevitably follows; a scream howling into chaos followed by a whisper bursting into quiet laughter.