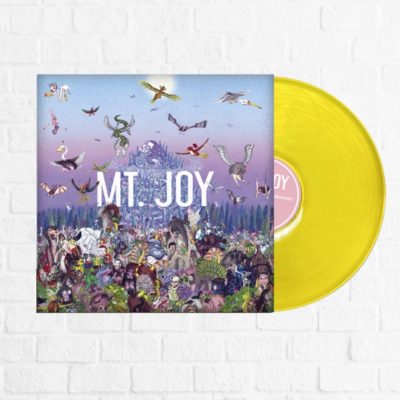 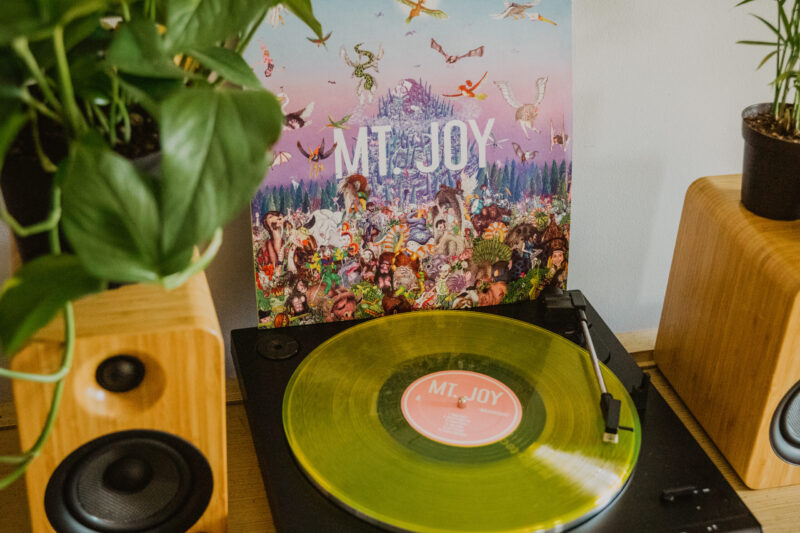 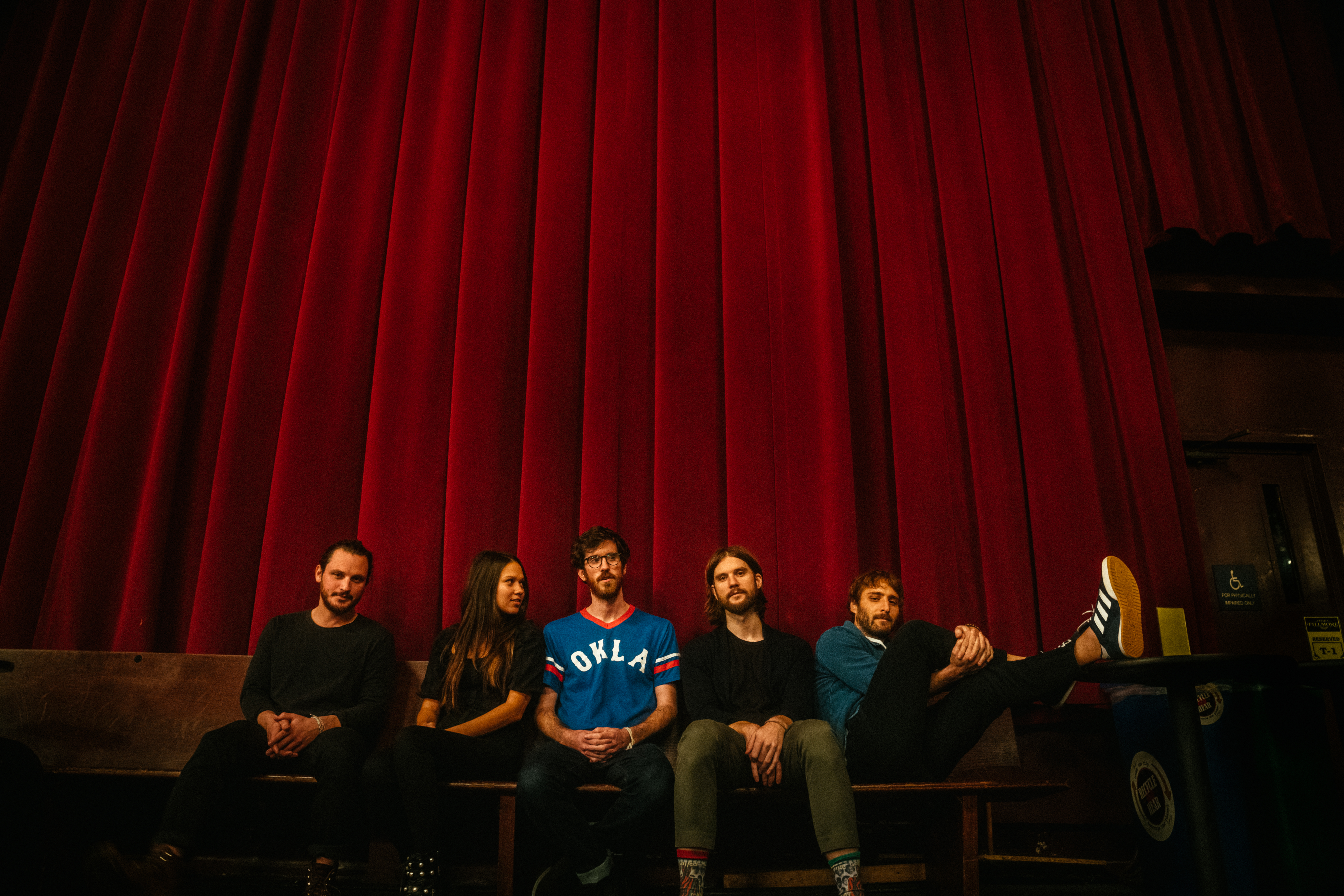 May 2020’s Record of the Month is the sophomore album by rock band Mt. Joy!

We’re so excited to offer our monthly vinyl club members this incredible album. Following up the enormous success Mt. Joy’s self-titled debut enjoyed, including a #1 single at Triple A radio, they hit the road with the likes of The Lumineers, Rainbow Kitten Surprise, and many more artists. Along the way, they wrote the songs for Rearrange Us, a sonically rich and adventurous album that really shows the growth this band has experienced through their career thus far, with sophisticated arrangements and instrumentation, as well as their trademark honest songwriting and highly sing-able hooks.

Do you have a vinyl subscription? Join the vinyl record of the month club now!

From the album’s announcement press release:

“Leading up to us hitting the studio, Sam and I were sharing an apartment together and we just got into this great creative rhythm,” says Matt Quinn about the songwriting process before hitting the studio. “Bouncing ideas off of each other, salvaging little acoustic snippets. Jackie and the rest of the band would come over and help build a real architecture around these ideas — putting together parts that now feel instrumental to these compositions. It felt like a real collective, heartening effort.”

An album about finding ways to work past one’s emotional and mental struggles with intentionality, Rearrange Us showcases the young band’s growing ambition and sonic experimentation. “My Vibe, Your Vibe” blends psychedelic affirmations with a rootsy stomp and a swirl of synthesizers, while “Come With Me” goes from a decayed choral elegy to a breezy, Allen Toussaint-indebted barn-burner — a battle cry for pushing yourself to have a good time amid new company. And “Have Faith,” a southern gospel-influenced duet with singer Liz Vice, exemplifies the band’s newfound range and Matt Quinn’s emergent songwriting prowess. The resulting album is a triumph of spirit and self-knowledge: Matt Quinn’s songwriting is at once more painterly and less precise, like perfectly rendered vignettes from a largely disjointed memory of a dream.

“Tucker Martine’s such a wizard with sound, and he’s got an incredible ear for song structure,” says Matt Quinn. “We knew we were getting somewhere when we’d finish a take and he’d say ‘I felt things.’ It was a good barometer that we were on track and creating something that felt meaningful.”

At first a vehicle for singer / songwriter Matt Quinn’s bedroom recordings, Mt. Joy’s swift rise is the stuff of childhood daydreams. The unexpected streaming success of debut single “Astrovan” thrust the band — Quinn, guitarist Sam Cooper, bassist Michael Byrnes, drummer Sotiris Eliopoulos, and keyboardist Jackie Miclau — into the itinerant musician’s lifestyle: performances at big name festivals like Bonnaroo and Lollapalooza, press notices in Rolling Stone (who deemed them “your new folk-rock heroes”), and dates touring with the likes of The Shins, Whitney, The Head and The Heart, and Neko Case.

They signed with Dualtone Records, and their self-titled debut album Mt. Joy was “a major breakthrough” (Billboard), earning the band over 2 million monthly Spotify listeners. Single “Silver Lining” hit #1 on the AAA Radio Charts, with “Jenny Jenkins” following it up by reaching #5. New fans — earned ear-by-ear with every tour stop, festival set, early morning radio session, and moment of internet discovery — were singing along at sold out club dates.

Mt. Joy… Where do I even start? I suppose I’ll take it all the way back to the first time I saw them live and had the pleasure of meeting them. We had just finished our first European tour and the last stop was Berlin. My girlfriend at the time (now my wife) and I had decided to stay for a week, since we were already there and it had always been a dream of ours to explore that magical city. We had just locked in Mt. Joy as support on our next tour and I saw that they were playing a show in Berlin the Day after ours. By then I had already fallen in love with their work, so I immediately hit them up and asked if we could come check out the show. Being the spectacular humans they are, they welcomed us with open arms.

Fate had smiled upon me.

The show was at a small venue, maybe 100 cap. As soon as they took the stage and began doing what they do best, I knew how incredibly lucky I was to be seeing them perform in such an intimate setting. I think everyone else in the room knew it, too. The songs were just like I’d heard many times before, but now they were filled with life by these wonderful people on stage. Then, I finally got to meet them and it was like reuniting with old friends. I do not speak lightly when I say these are some of the most genuine, kind hearted, and absolutely hilarious people I’ve ever met. We shared laughs and road war stories and expressed our excitement for the upcoming tour. A friendship had been born.

Fate had smiled upon me once again.

Fast forward now to the end of the RKS x Mt. Joy tour and we’re all gathered on the sacred ground that is the stage of the Ryman Auditorium in Nashville, TN to play hacky sack. That’s right, hacky sack. It’s one of those memories you will never forget. We had formed a beautiful bond with the Mt. Joy gang from sharing the stage with them night after night (and playing a ton of hacky sack) and it’s something I will be forever grateful for.

Fast forward once more, now to present day. Times may be dark, but a beam of glorious light shines through the clouds; that light is Mt. Joy’s Rearrange Us. From start to finish, this record goes above and beyond what I could’ve ever imagined standing in that tiny venue in Berlin. They have taken their sound and evolved it into a full course feast for your ears. It is not genre defined, it is not overshadowed by its previous
accomplishments, it is not afraid to take risks. It IS overflowing with talent and heart and it IS everything a second record should be and more.

So, if you are reading this and you have just received this album, today, my friend, fate has smiled upon you. Enjoy.