THE HISTORY OF VINYL RECORDS

We know you love collecting and listening to vinyl (so do we) – but have you ever learned the history of this format we all love so much?

Let’s begin with a fun fact: the first instance of what we now know as a vinyl record didn’t actually produce audible sounds! French inventor Edouard-Leon Scott invented a device called the phonautograph in 1857, in which a vibrating diaphragm and stylus would record sound waves by tracing them onto paper and creating a visual representation of the audio with no playable sound component. This method helped people visually analyze sound waves and better understand how they worked.

It wasn’t until 1877 that inventor Thomas Edison brought forth the first phonograph, a device capable of both recording and producing sound. The first tests were conducted on wax-coated paper tape; however, the first experiment that produced audible recorded sound, according to his notes, used tin foil as the recording medium. A metal cylinder with grooves indented into it and a stylus would rotate around, vibrating with the sound waves, marking grooves into the tin foil.

Once it was completed, the recorded sounds could be heard when rotating the stylus back over the grooves. However, the tin foil production method was proved to be too crude and cumbersome to be put to any real use. About a decade later, in the 1880s, Edison introduced a hollow wax cylinder into the process to record on instead of the thin, fragile tin foil. This method proved to be much more durable and useful, and it soon helped to establish the market of sound recordings through the early 20th century. 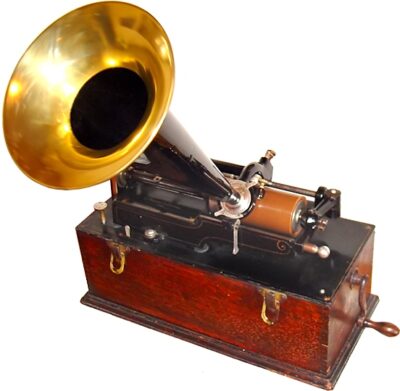 In 1889, German-American inventor Emile Berliner developed lateral-cut disc records and the gramophone, which was different from Edison’s phonograph that required the listener to use a hand-crank to generate sound from the discs. The machinery, record players, and records were tweaked and developed over the next several years, and in 1901 Berliner and his manufacturing associate Eldridge Johnson created a new conglomerate called Victor Talking Machine Company in Camden, New Jersey. The Victor Company developed the 10-inch vinyl disc, which could play for up to four minutes of recorded music.

As the years progressed, new playing surfaces emerged, including celluloid, which derived from plastic and was much less fragile than the wax cylinders. However, the disc format ended up selling much better throughout the early 1900s and 1910s. As the formats and sound quality continued to be improved over the next several decades, different sizes of discs were developed, which could produce discs that needed to be played at a variety of speeds.

The sizes were determined by how many revolutions per minute, or RPM, the disc would spin at on the player to reproduce the sound at the correct speed. Records were pressed at 78 RPM at first. As people continued to improve the production, albums and recordings were pressed at 33 ⅓ RPM, which we currently know as the set speed for a full vinyl long playing record, or LP record. Some are also pressed at 45 RPM, which is the current format of individual singles pressed to vinyl.

33 ⅓s and 45s were pressed using microgrooves, which cut grooves extremely close together and could fit more music on each side of the microgroove record. The 33 ⅓ RPM LP was developed and marketed by Columbia Records in 1948, and the first release was a series of 85 classical pieces beginning with a Mendelssohn violin concerto played by the Philharmonic Symphony of New York.

There’s so much to answer about how vinyl records are made; they’ve been innovated and improved upon many times throughout history – and we’ve only just scratched the surface. So many pressing plants nowadays are making high quality records from polyvinyl chloride, creating fantastic colored vinyl records, putting photos onto picture discs, and even putting liquid into the wax itself! The resurgence of vinyl records in popularity, far above other mediums such as compact discs, has catapulted the creativity of artists and manufacturers into the stratosphere, and in many ways, the sky’s the limit!

Learn more about the history of vinyl records and how vinyl records work with this great article on Independent Plastic. And if you want to really get into the nitty-gritty, the Phonograph Record Wikipedia article links to a ton of fantastic sources we learned so much from including how record players work. Also, check out this step-by-step process of how to make vinyl records in a modern plant via BBC News.