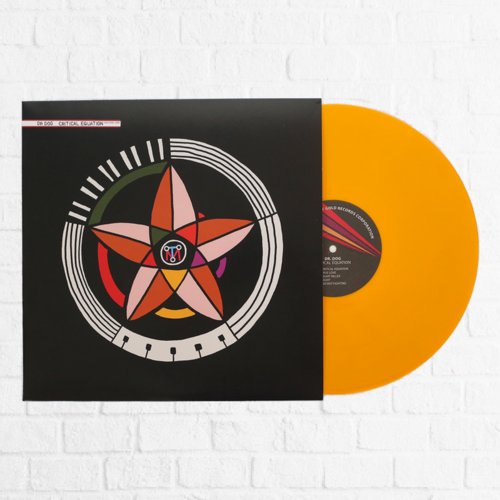 Dr. Dog’s new album “Critical Equation” was our Record of the Month for April.

“The group’s brilliant new album, ‘Critical Equation’ is the most infectious and adventurous collection Dr. Dog has laid to tape yet, the record was born from a journey of doubt and discovery, a heavy, sometimes painful reckoning that ultimately brought the band closer together with more strength and clarity than ever before.”

The band normally records their albums in their own studio, but decided to shake it up and head out to L.A. to record with with producer/engineer Gus Seyffert.

“One of the big conclusions we came to was that we’ve got to blow this whole scene open,” explains Leaman. “We needed somebody to be the boss, somebody to be in charge of us in the studio. It’s not the way we’ve ever worked before, but we really trusted Gus.”

We were excited to get this exclusive record to our club members along with a note from our curator, Drew Holcomb, who picked this month’s feature.

Amidst the streamlining of pop and rock radio, if you listen to critics, they will tell you that rock’n’roll music is dying, and no one cares about guitars, harmonies, and bands anymore. Well, those critics are all wrong. Bands like Dr. Dog are keeping rock’n’roll alive and well, while continuing to push the sonic boundaries of putting music to the human experience.

I first saw Dr. Dog at Beale Street Music Festival in Memphis five or six years ago when we had played earlier in the afternoon. Jon Radford, who used to play drums in The Neighbors, had been telling me about them, so I went and checked it out. Their show reminded me of everything I love about bands and live music. Tight harmonies, interesting songs, a free-wheeling communal vibe that spilled out into the audience. Everyone was having a fantastic time.

I am thrilled that we get to feature their 10th record, Critical Equation, this month on the Magnolia Record Club. They are on the same family tree as The Beatles, Wilco, and a lot of other bands I have had on repeat for the last 20 years. This record sounds like an old friend and you can taste the band’s personal and musical familiarity with each other throughout the record. These are veterans making some of the best music in their band’s history.