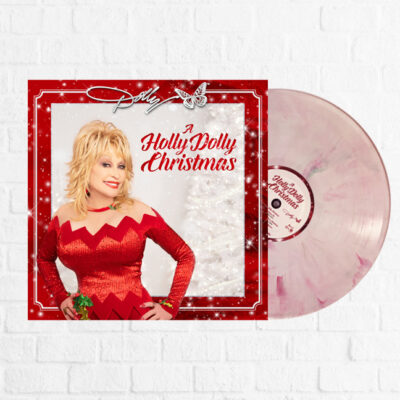 November 2020’s Record of the Month is the new holiday album from country legend Dolly Parton, A Holly Dolly Christmas!

Dolly Parton is the most honored female country performer of all time. Achieving 25 RIAA certified gold, platinum and multi-platinum awards, she has had 25 songs reach number 1 on the Billboard Country charts, a record for a female artist. She has 41 career top 10 country albums, a record for any artist, and she has 110 career charted singles over the past 40 years. All-inclusive sales of singles, albums, hits collections, paid digital downloads and compilation usage during her Hall of Fame career have reportedly topped a staggering 100 million records world-wide. She has garnered 7 Grammy Awards, 10 Country Music Association Awards, 5 Academy of Country Music Awards, 3 American Music Awards and is one of only five female artists to win the Country Music Association’s Entertainer of the Year Award. In 1999, Dolly Parton was inducted as a member of the Country Music Hall of Fame. She has her own star on the Hollywood Walk of Fame and became a member of the National Academy of Popular Music Songwriters Hall of Fame in 2001. Broadcast Music, Inc. honored Dolly with their Icon Award in 2003, and in 2004, the U.S. Library of Congress presented her with their Living Legend Award for her contribution to the cultural heritage of the United States. This was followed in 2005 with the National Medal of Arts, the highest honor given by the U.S. government for excellence in the arts. In December 2006, Dolly was honored by the Kennedy Center for the Performing Arts for her lifetime of contributions to the arts. In June 2007 Dolly was named the recipient of the prestigious Johnny Mercer Award from the Songwriter’s Hall of Fame. The Johnny Mercer Award is exclusively reserved for a songwriter who has already been inducted into the Songwriters Hall of Fame in a prior year, and whose body of work is of such high quality and impact, that it upholds the gold standard set by the legendary Johnny Mercer. In February 2011, Dolly received the coveted GRAMMY Lifetime Achievement Award. The award is given by the Recording Academy to performers who have made creative contributions of outstanding artistic significance to the field of recording.

Natalie Hemby (of the Highwomen)

Growing up in Tennessee, I’ve never known a Christmas without Dolly Parton. Her songs and holiday movies permeated our red brick house like hot chocolate and a wood-burning fireplace. To me, the North Pole was actually a little cabin in the Smoky Mountains in East Tennessee. Christmas was Hard Candy, and not so much a Marshmallow World. And because she is more generous than Ol’ Saint Nick himself, she has surprised us with a new Christmas record. Just the salve we need for 2020.

If you’ve never been to Dollywood during Christmas, this record sonically captures the magic of her world. I’ve been a thousand times, so let me guide you…imagine yourself entering the park to “Christmas on the Square” or “Holly Jolly Christmas” with all the little shops buzzing, and smell the cinnamon in the air. Next, you’ll take a walk underneath the blue crystal lights draped like Spanish moss overhead, while “Cuddle Up or Cozy Down” or “Pretty Paper” is playing, and you’re holding the hand of someone you love. Dolly loves her friends and family, and frequently features them in her shows. Imagine sitting on a wooden bench, having a cup of hot cider and watching Dolly sing “You Are My Christmas” with her brother, Randy Parton, or perhaps she brings Jimmy Fallon on stage to sing “All I Want For Christmas Is You”. I mean, with Dolly, anything is possible.

But the most moving part, to me, about Dolly, is her faith. There’s a little white church with old wooden pews that sits in the middle of Dollywood and if I close my eyes and listen to “Circle Of Love”, I imagine myself there. To be honest, I have a hard time listening to this song without tears because it reminds me of the true Christmas miracle….”Circle of love, halo of light. When Jesus was born, on that Christmas night”….

Whether it’s the gift of faith, music, or family, Dolly knew we needed our spirits lifted this Christmas…and that’s why ”A Holly Dolly Christmas” is truly a gift to all.