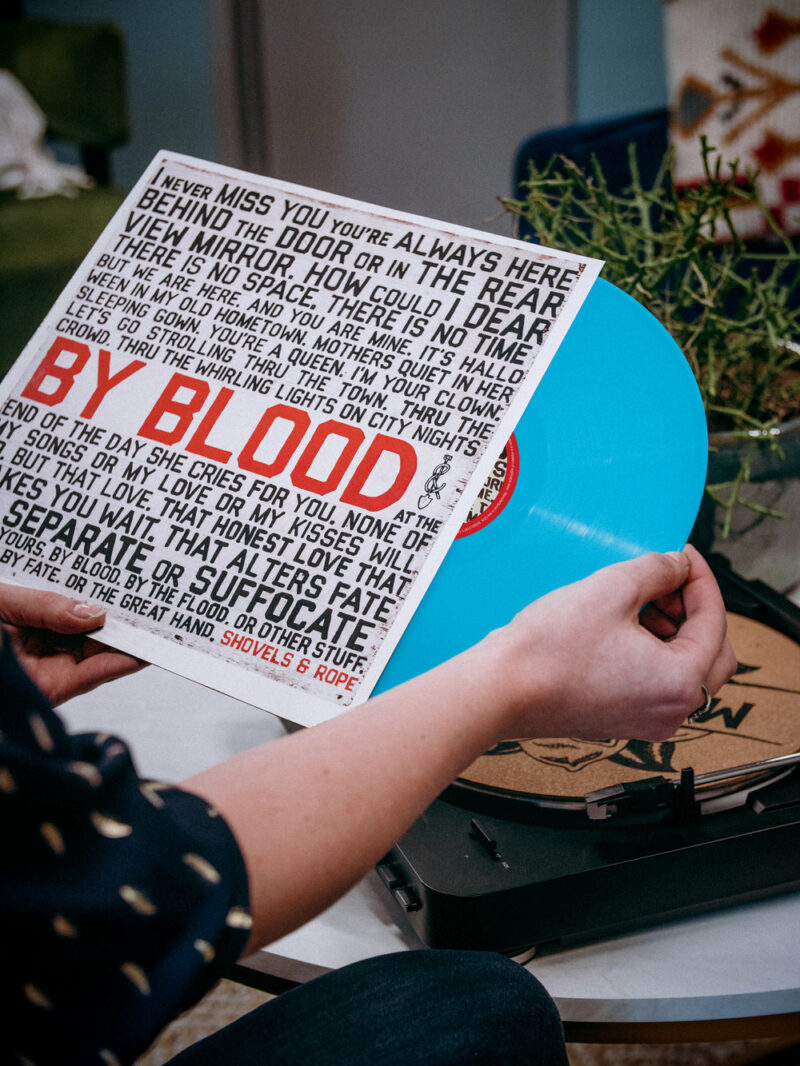 Not a vinyl record of the month club member yet? Join our vinyl subscription service today!

March’s Record of the Month was the latest album from South Carolina rock duo Shovels & Rope, By Blood, pressed on exclusive blue vinyl!

Shovels & Rope’s By Blood is a collection of songs that tell tales of vulnerability and humanity sung through gritty, raw, powerful voices. It’s a cinematic journey with relatable and profound characters and stories. Cary Ann Hearst and Michael Trent have been making music together since 2011 and have toured relentlessly, making new music wherever they can, and their honest songwriting, captivating live performances, and unique sound have been entertaining audiences all across the world.

Accomplished musicians in their own right prior to dedicating themselves full time to Shovels & Rope in 2011, Michael Trent and Cary Ann Hearst have made a career together by seizing opportunities and never resting on their laurels or being complacent in doing something just because. Carving out a niche in the music world with strong, roots/indie/folk/rock-inspired efforts like 2012’s O’ Be Joyful, 2014’s Swimmin’ Time, and 2016’s inward-looking Little Seeds, as well as their powerful live show, far-reaching tours, and myriad TV and festival appearances, Shovels & Rope have earned the right to follow their own muse. And so, in an effort to satisfy their numerous creative interests and adapt to a changing industry, Trent and Hearst have firmly planted their flag in realms beyond recording and releasing albums.

Shovels and Rope is a gutsy, folksy, rocknrollsy duo out of Charleston, SC and this new album, By Blood, is their latest confession of love lost and found, and the deep bonds of marriage, both of the personal kind and the musical kind. The ten songs on this new album are portraits of the two artists wrestling through the goodness of the human heart, whose troubles and faults are on display in full cinematic display, in a bigger more polished, yet still unrefined, musical and vocal style.

Shovels and Rope splashed on to the Americana scene with their debut 2012 album O’ Be Joyful, a stripped down but noisy affair that carved out a unique claim in the indie rock and folk world and launched them into cult status with a widespread but hardly mainstream fan base. Since then they have toured alongside a litany of legendary songwriters and artists and starts their own music festival, High Water Festival, in Charleston. In its 3rd year, this year it will have Leon Bridges, The Head and the Heart, Lord Huron, Jenny Lewis, Hayes Carll, Preservation Hall Jazz Band, and many others.

By Blood is sure to be another fantastic chapter in the book Shovels and Rope have been writing together for the last 7 years. Its sense of particular places and stories, delivered with their perfect blend of earnest heartache and joy will sure be around for a long time.