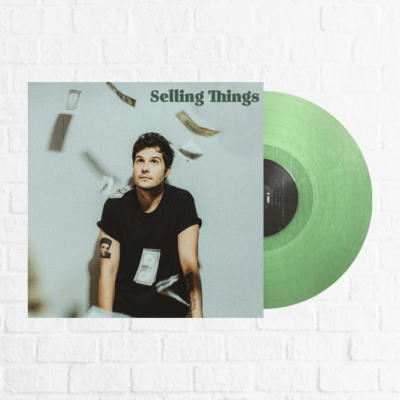 “When I was growing up, my dad had all these cassette tapes that we’d listen to in the car,” says Dunne. “We never had air conditioning, though, so the tapes would start to melt and get this creepy, warbly sound, which I thought about a lot when I was recording this album. I wanted to make something that felt like those cassettes, something that was equal parts exciting and mysterious and a little bit scary, because that’s what it feels like to be alive right now.”

Raised in New York State, Dunne was drawn to music with a singular devotion from an early age. He picked up the guitar first, later adding piano and voice to his repertoire as he fell in love with kind of songwriters who paired muscular rock and roll with raw, literate self-examination.

“There was a video rental store in town with a music documentary section, and as a kid, every week I’d go and rent the same live Springsteen VHS,” says Dunne. “My dad worked in a factory and my mom was a secretary, and I remember watching Bruce and thinking that music looked like a more fun way to make a living. I decided then and there that I was going to be a songwriter, and I never left room for anything else.”

We asked Brian a few questions about his musical upbringing, life on the road, and more. Read on to get to know him better!

Discover new artists every month with a vinyl subscription. Join the vinyl record of the month club and get new music!

ADD TO YOUR COLLECTION

Well I was born with a vinyl collection, thanks to dear old mom and dad.  So it’s something I took for granted at first, and honestly, all the records they played me had such a traumatic effect on me that I wound up becoming a musician.  But I have particularly fond memories of the first time I was spun “Bayou Country” by CCR and “Desire” by Bob Dylan.

I think Caroline Rose is brilliant- I’ve been listening to her new record “Superstar” a lot.  Also, “Father Of The Bride”— the last Vampire Weekend record; I have a soft spot for double albums.  And I’m never not listening to “Court & Spark.”  Joni 4 life.

New York City, because it is everything they say it is and much better and much worse and everything in between.  The food is the best, the bars are open til 4am, and every morning a kid throws the New York Times at my stoop and it starts all over again.

Bruce Springsteen & The E Street Band, 11/19/2007 in Boston.  It was a testament to why they are the greatest live band in the world.  I’ve seen them a bunch of times, but that show was pure magic.

My sanity, or it gets pretty weird pretty fast.  Other than that I’m honestly pretty loose.  I don’t bring my coffee setup or anything comforting; I want to see what each town has to offer, even if it’s shitty coffee.

It’s pretty hard to lock in just one — especially because the abundance of the last 7 years, I’ve toured solo and my guess is that if you’re reading this, you’re just learning who I am now… so you can imagine the places I started in.  I’ve driven like 700 miles to get to the venue only to find that it failed inspection and shut down.  I’ve been double booked and had to play at the same time in the same room with the other act.  I shared a dressing room with 3 clowns on stilts once; that spoke volumes.

I’m a music fan first and foremost; I tend to invest in consumer equipment- stereo systems and speaker setups— as opposed to pedals and amps and stuff like that.  So I’m always just thinking like a music fan— what do I want to hear?  Eventually I exhaust my collection and that’s when I sit down and figure I’ll just write it.  It’s a pretty good technique, honestly.

I’m going to burn in hell for picking a Greatest Hits record, but the Marvin Gaye/Tammi Terrell 1970 Motown compilation is a record I will never tire of.  Track 1, Side 1 is “Your Precious Love” — I’ll never get over that.

Tom Waits, just to be in the room.  Can I pick an era?  Not that he doesn’t seem fun now, but I imagine there’s a bit less debauchery.  I just want to get in trouble and eat eggs with him in 1979.  Are eggs a collaboration?  I feel like I’ve lost the plot now.  Tom Waits is my answer.