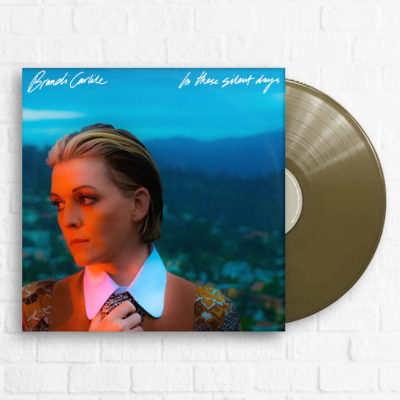 Brandi Carlile’s new album In These Silent Days on Indie Store Exclusive gold vinyl, one of only two colored pressings made!

Brandi Carlile is a five-time GRAMMY Award-winning singer, songwriter, performer, producer and activist, who has become known as one of music’s most respected voices. Beloved by fans and critics alike, Carlile is nominated in two categories at the 63rd GRAMMY Awards: Best Song Written For Visual Media (“Carried Me With You” from Onward written with Phil Hanseroth and Tim Hanseroth) and Best Country Song (“Crowded Table” performed by The Highwomen written with Natalie Hemby and Lori McKenna). She also produced The Secret Sisters’ acclaimed new album, Saturn Return, which is nominated for Best Folk Album.

Adding to her esteemed career, Carlile recently confirmed the publication of her forthcoming memoir, Broken Horses, to be released April 6 via Crown—an imprint of the Random House Publishing Group, a division of Penguin Random House LLC. Additionally, this past fall, Carlile released “A Beautiful Noise,” a new duet with Alicia Keys that was written by an all-female team of musicians including Carlile, Keys, Ruby Amanfu, Brandy Clark, Hillary Lindsey, Lori McKenna, Linda Perry and Hailey Whitters.

In addition to her work as a solo artist and producer, Carlile is also a member of the acclaimed collaborative movement, The Highwomen, alongside Natalie Hemby, Maren Morris and Amanda Shires. Released to overwhelming critical praise, the collective’s self-titled debut album entered at #1 on the Billboard Country Albums chart (Low Country/Sounds Elektra Records). Of the group, Entertainment Weekly declares, “As solo singer-songwriters, the women are formidable; together, they are sublime…Pooling their strengths in this supergroup creates a Voltron that radiates heart, humor, and high times.”

These recent projects add to a series of triumphant years for Carlile following the release of her GRAMMY Award-winning album, By The Way, I Forgive You, in 2018. Since its release, Carlile has won five GRAMMY Awards, was awarded Billboard’s Women In Music “Trailblazer Award,” CMT’s Next Women of Country “Impact Award” and was named Artist of the Year at the 2019 Americana Music Association Honors & Awards.

On top of being a musician and writer, Carlile is also a founder of the Looking Out Foundation. Created in 2008 with Tim and Phil Hanseroth, Looking Out amplifies the impact of music by empowering those without a voice with varied initiatives including campaigns focused on Children in Conflict/War Child, The If Project, Fund Racial Justice, Fight The Fear, Looking Out For The Hungry and more. To date, they have raised over $1 million benefiting children whose families, communities and schools have been torn apart by war through their 2017 Cover Stories project and, overall, over $2 million to grassroots causes.

Carlile lives in rural Washington state with her wife, Catherine, and two daughters, Evangeline and Elijah.