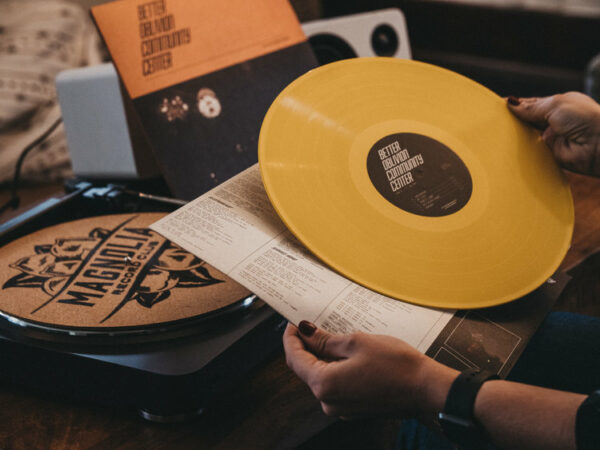 Not a vinyl subscription member yet? Join the monthly vinyl club now!

February’s Record of the Month is the self-titled debut of indie-folk heroes Conor Oberst (of Bright Eyes) & Phoebe Bridgers’ new band, Better Oblivion Community Center, pressed on exclusive yellow vinyl. The project was conceived during a show at the Bootleg Theater in Los Angeles; it was Oberst’s show, and Bridgers was opening thanks to a friend putting her on the bill. Oberst was immediately taken by her voice when he heard her play: “There are not a lot of people whose voice stops you in your tracks like that,” Oberst reflected in an interview. Soon after that experience, the pair went on tour together, would occasionally guest at each others’ shows after the tour, and began to write songs together. Their voices, Phoebe’s pure and piercing and Oberst’s weathered rasp, complement each other so well, and their individual styles come together perfectly in this brand new iteration, along with contributions by the rhythm section from Dawes, among others.

Better Oblivion Community Center was co-written and co-produced by Bridgers and Oberst, with additional production from Andy LeMaster. It features appearances from Nick Zinner (Yeah Yeah Yeahs), Carla Azar (Autolux, Jack White), Christian Lee Hutson and Anna Butterss, as well as Dawes’ Wylie Gelber and Griffin Goldsmith (Oberst’s backing band on his Upside Down Mountain tour). Bridgers and Oberst wrote and recorded in Los Angeles in the summer and fall of 2018.

Bridgers and Oberst first met back in 2016 when Bridgers opened for Oberst on his solo tour and he was immediately struck by her talent. Oberst later contributed vocals to “Would You Rather,” a track from Bridgers 2017 debut LP, Stranger in the Alps. Better Oblivion Community Center is Bridgers’ first full-length since Stranger in the Alps and Oberst’s first full-length since his 2017 solo record, Salutations.

The folk rock supergroup of Better Oblivion Community Center is a creative tour de force from a combo of two generations’ most famous uber honest confessional songwriters, the veteran Conor Oberst of Bright Eyes fame, and 24 year old Phoebe Bridgers who dropped a seminal debut album in 2017 Stranger in the Alps. They came together to record a concise folk rock opus about escaping the doldrums of loneliness and isolation that is the modern digital world we inhabit.

Oberst reached out to Bridgers after her music debuted and told her. “I think a lot of people will find good comfort in your songs. They are soothing and empathetic, which I know I need more of in my life.” They are both writers known for their intense honesty and attention to detail in the midst of tight and thoughtful melodic and rhythmic creation.

The theme of the record is… Life is hard, let’s go it alone, but together. Maybe in this we can make more sense of the chaos and pain and heartache that life hands us. It’s a sincere attempt at hope without discarding their awareness of the cosmic joke that life can feel like at its hardest moments.