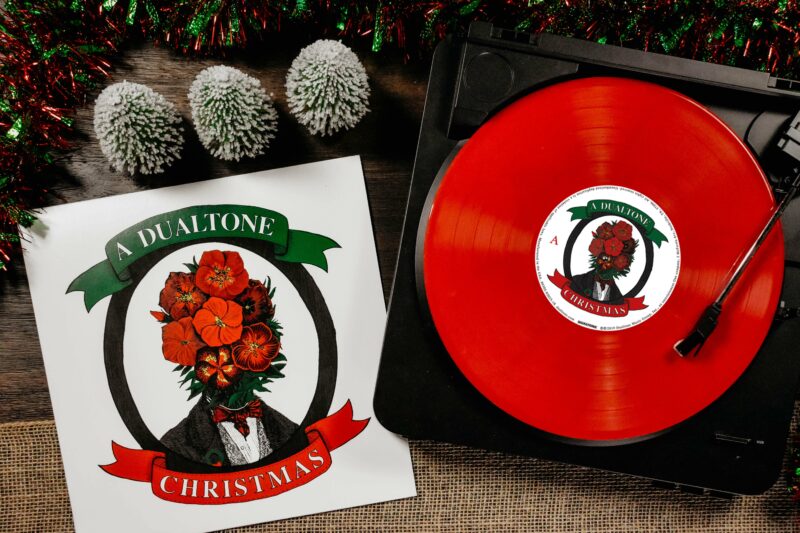 Side A
1. The Lone Bellow – A Marshmallow World
2. The Lumineers – Blue Christmas
3. Drew & Ellie Holcomb – Let It Snow
4. Ivan & Alyosha – Being Home for Christmas
5. Langhorne Slim – Deck the Halls (With Boughs of Holly)

The Record of the Month for November is A Dualtone Christmas, an exclusive compilation of your favorite Christmas songs sung by some of our favorite artists printed on a festive red vinyl!

Our founder Drew Holcomb curated the record this month, and here’s what he had to say about it:

In 2010 I signed a record deal with a label called Dualtone Records. I was friends with one of the owners and as our career grew he decided to help us with our Chasing Someday album. Things were starting to pick up steam for us and Dualtone was literally in our neighborhood so it made a lot of sense to me. They have some of my favorite acts on their roster; The Lumineers, Shovels & Rope, Gregory Alan Isakov, Amos Lee, and others. I first heard the Lumineers’ “Ho Hey” about 2 days before they were signed to Dualtone. Paul Roper, that friend, sent me the song and said, “We think this is going to be a hit”. What an understatement!

One of my favorite Dualtone moments was in 2010, right after I joined the family They were throwing a party for the legendary Guy Clark, who was on their roster in his last 10 years of life. I sat down next to him, nervously asking him, “So, Guy, when you were my age, what artists were you listening to?” He looked at me, slowly hand-rolling his cigarette, took a big drag and answered, “Me!” I think of that moment every time I hear his music.

The idea for the Magnolia Record Club came from me being a subscriber to the Vinyl Den, Dualtone’s subscription club, that we have since merged with. They put out some of the most consistently good and authentic music on the market. They release music from true artists. This Christmas compilation is a great collection of tunes, some standards and some originals, that showcases the great Dualtone family, including a great Dean Martin cover, “Marshmallow World” by my good friends and newly Dualtone’d band, The Lone Bellow. This is a great record, and I hope you not only enjoy it during the holidays, but that it leads you down the rabbit hole towards the great records and songs of all these artists.

Need a gift idea? How about a vinyl subscription? Learn more about how you can gift the club and give someone the vinyl record of the month club!

ADD TO YOUR COLLECTION
x
Are you sure you want to add this addon?
Add
x